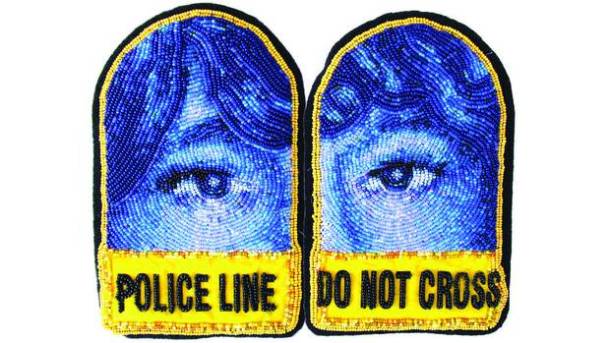 “How do you mark an unexplained absence, a disappearance, a violent death not accounted for?

What do you do when that question is multiplied 600 times…?”

The mark, the memorial to these missing women: handmade partial shoes, signifying the unfinished life.

“In July, 2012, Christi Belcourt, a Michif (Métis) artist who lives near Sudbury [Ontario], made a Facebook appeal for help with a year-long collaborative art project called Walking With Our Sisters [walkingwithoursisters.ca], to honor 600 missing or murdered aboriginal women. She hoped to assemble a show of 600 pairs of hand-made moccasin vamps (uppers) – but by year’s end had received 1,723 pairs, from artists and craftspeople all over North America and beyond. Sixty-five new beading circles sprang up around the project.”

One of the Ojibwa artists was quoted, saying, “We say there’s a prayer in every bead.”