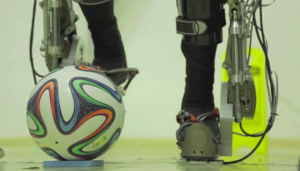 A 29-year-old paraplegic literally kicked off soccer’s World Cup competition in Brazil this summer, using a mind-controlled exoskeleton that looks as if it came from the “Iron Man” movies.

The organizers of the international Walk Again Project said the symbolic soccer-ball kick was performed during the World Cup’s opening ceremonies in São Paulo’s Corinthians Arena by Juliano Pinto. He’s an athlete from Galea in Brazil’s São Paulo State who lost the use of his legs after a car accident in 2006.

The Project’s long-term aim is to bring together neuroscience, engineering and medicine to build brain-controlled devices so that paralysed people will be able to leave their wheelchairs and literally walk again.