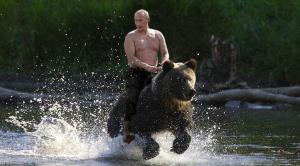 A Pentagon research team is studying the body movements of Russian President Vladimir Putin and other world leaders in order to better predict their actions and guide U.S. policy. The “Body Leads” project, backed by the Office of Net Assessment (ONA) – the think tank reporting to current Defense Secretary Chuck Hagel, uses the principles of movement pattern analysis to predict how leaders will act. Brenda Connors, director of “Body Leads”, prepared a report called “Movement, The Brain and Decision-making, the President of Russia, Vladimir Putin.”

Connors compiled Russian television footage which shows, among several instances, Putin’s irregular gait at his first inauguration in 2000. As he strode down the long red carpet at the Great Kremlin Palace, Putin’s left arm and leg were moving in an easy, natural rhythm. But his right arm, bent at the elbow, moved in a stiff way, as if jerked by the shoulder, and the right leg dragged, without absorbing his full weight. All the momentum and energy in Putin’s gait came from the left side; it is as if the right side was just along for the ride. Even the right side of his torso seems frozen. When he is holding a pen, his right hand appears to have only an awkward, tenuous grasp on it.

Connors has shown footage of Putin’s walk to a range of experts. Continue to the link to read their impressions.