Going out on a limb, Pope Francis met to pray with Israeli and Palestinian leaders. The Rev. Thomas Reese, a veteran Vatican analyst for the National Catholic Reporter noted “In the Middle East, symbolic gestures and incremental steps are important.”

“Palestinians to walk away from peace talks.”

“Rouhani’s victory in 2013 is the Iranian equivalent to Obama’s victory in 2008: an electorate that voted overwhelmingly for hope and change, understanding that the process will be a marathon, not a sprint,” said Reza Marashi, research director at the National Iranian American Council in Washington.

[U.S. Secretary of State John] Kerry told reporters he was flying home to Washington to meet with President Obama to reassess the peace negotiations and whether there was a path forward. “There are limits to the amount of time and effort that the United States can spend, if the parties themselves are unwilling to take constructive steps in order to be able to move forward.”

“For U.N. Chief, a Dance of Diplomacy Is Halted by a Misstep. Ban Ki-moon… choreographed a precise diplomatic sequence on Syria that relied on others to perform their roles equally precisely. The choreography did not go as planned, and Mr. Ban stumbled under the spotlight.”

Women in Saudi Arabia: Unshackling themselves 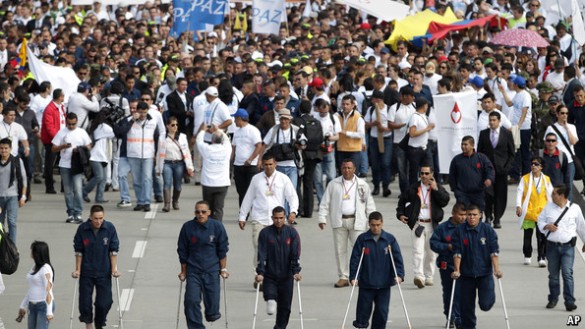 “With nothing tangible yet to show for six months of talking, public faith in the peace negotiations between Colombia’s government and the FARC guerrillas has shown signs of eroding. That prompted tens of thousands of Colombians, many of them dressed in white, to march in Bogotá on April 9th to show their support for the talks.

The march brought together some strange bedfellows: President Juan Manuel Santos was joined by politicians who are FARC fellow-travellers, and guerrilla victims rubbed shoulders with FARC political activists. The main dissenter was Álvaro Uribe, Mr. Santos’s predecessor, who has done his best to sabotage the talks. He complained that the march was a “deception” and that a peace agreement will allow the FARC to get away with murder.”

Colombia’s government has stepped up military operations against FARC, killing 26 in a series of clashes since the weekend, according to the army.

Uruguay’s president Jose Mujica plans to meet in Havana with Colombia’s President Juan Manuel Santos and FARC guerrilla leaders to urge them to accelerate peace talks. “Never before in the 50 years since this confrontation began, has peace been so close.” said President Mujica.

The talks have been underway in Havana since November 2012, with preliminary agreements reached on two of five agenda points. Negotiators are currently discussing how to deal with drug trafficking, an industry that has fueled the conflict. Other issues that remain unresolved are compensation for victims of the conflict and the disarming of the rebel forces.