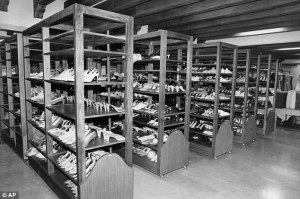 Imelda Marcos became known worldwide for her massive shoe collection. She was often used as a symbol of excess in the Philippines, where many residents were forced to walk barefoot due to the extreme level of poverty in nation. The flamboyant first lady’s infamous footwear collection is housed in the National Museum in Manila. The once beautiful and expensive designer shoes have now been ravaged by termites, storm damage, and just overall neglect.

The enormous shoe collection was among the belongings left behind when the former Philippines’ first lady and her dictator spouse were driven from the country by a revolt in 1986.