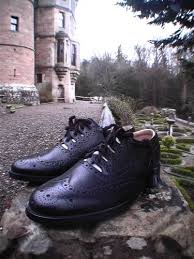 The origins of Ghillie Brogues stretch back through Scottish history. A‘Ghillie’ was an indispensable assistant to a Highland chief – carrying hunting rifles or fishing rods. On occasion, he even carried his employer.

Ghillies walked and walked….through the bogs, rivers, bracken, and heather. They scaled the highlands or scrambled through the lowlands.  If walking was hard on a man, it was worse for his footwear.

Ghillie Brogues were designed for the work of a Ghillie. A patterned network of fine holes punched in the shoe leather called ‘brogueing’ allowed any water to drain while walking. Originally, the laces were above the ankle so the shoes wouldn’t get stuck in the mud. Thistle Shoes of Scotland makes Ghillie Brogues as they have always been made. Tough as nails – but with a heart of gold. Not unlike the people for whom they’re named.

Why call the company “Thistle Shoes?  In the Middle Ages, the Scots and the Norsemen were at war. King Haakon of Norway and his men landed at the Coast of Largs at night intent on surprising their Scottish foe. Removing their boots, they crept on bare feet towards the Scottish army. Then one of the attackers stepped on the sharp spines of a Scots thistle. The yell he made at this unwelcome assault on his feet alerted the Scots who drove the attackers from their shore.