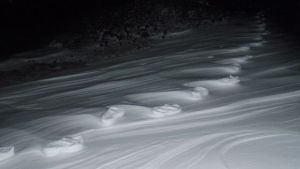 This photograph shows a trail of footprints across Antarctica. The person who made them is long gone.

Raised footprints take weeks to form. They are the product of a very specific environment. The snow has to be loose and dry, so that the foot can sink in and compress the snow until it’s hard. Since snowfall and rain can spoil the print, the weather has to be dry. And there has to be constant wind. As someone walks, their feet tamp down the snow until it’s extremely hard in comparison to the snow all around it.

As the wind sweeps across the area, it whisks away loose particles of snow. It takes considerably longer to whisk away the compressed snow of the footprints. Eventually, the wind wears down an entire plain, or side of a hill, except for the hardened tracks in the snow.

Composer Claude Debussy was not a natural at the piano. At first, he struggled to learn to love the instrument. But as he continued to write piano music, Debussy started trying new things, new sounds. He seemed to want to take the piano to places it had never been before.

Debussy’s prelude, Footsteps in the Snow, with its quiet, snowbound character was radical when it appeared in 1910.  The composer inscribed these instructions on the manuscript: “This rhythm must have the sonorous value of a landscape sad and frozen.”

“We tend to think of radical obsession as something loud, like Beethoven,” Commentator Rob Kapilow tells Performance Today host Fred Child, “But you can be radically obsessed in a quiet landscape, as well…. This piece is a study of two footsteps — left and right. And the amazing thing is what’s going to happen with that. In just these two tiny footsteps, Debussy manages to hear a complete universe.” 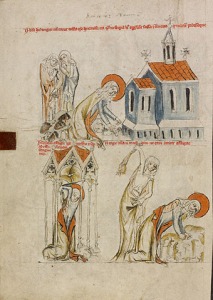 Saint Hedwig was a duchess in Silesia, an area that overlaps current-day Poland, Czech Republic and Germany. Even in the depths of winter, she insisted on showing her humility by walking to church in her bare feet.

In the upper portion of this miniature image, a servant woman points in horror to the bloody footprints left behind as Hedwig walked in the snow. Below, the saint inflicts wounds on her own back, and then she appears again, clenching her fists in anticipation of the blows. In this way, Hedwig sought to prove her willingness to suffer pain for her faith. Self-inflicted pain was seen in the Middle Ages as a voluntary form of penance, a way of understanding and participating in the Passion of Christ.

There is more to the Saint Hedwig story, for example, testimonies of miraculous changes of water into wine.  For the details on that, check the links.

Simon Beck takes playing in the snow to an extreme.  “It just seemed like a natural thing to do,” Beck says. “Right outside the building where I live in the winter, there’s a frozen lake about two-thirds the area of a soccer field. So you’ve got this great big area of completely untracked snow, which people don’t usually go on because of warnings about walking on the ice. I just thought, let’s draw something on it.” … With snowshoes.

Though Beck created the first designs in his head, as they got more complex, he started planning them out in detail on paper. He studies crop circles and other geometric patterns as inspiration. Out on the lake, he might count his steps or use string to measure angles, or, if a previous design is still peeking through the snow, he’ll use that as a template. The whole process usually takes about ten hours.

Beck likes to work on Lac Marlou, near his apartment in the French Alps, in part because a nearby mountain gives him a good place to take photos when he’s done. But the mountain also casts shadows on the snow, making it hard to get exactly the shot he wants. His next plan: Buy a drone, so he can fly a camera above a different lake. The local ski resort likes the snow art. “At first they thought I was a bit mad, but now they see it as good promotion.”

Check the link for additional pictures. 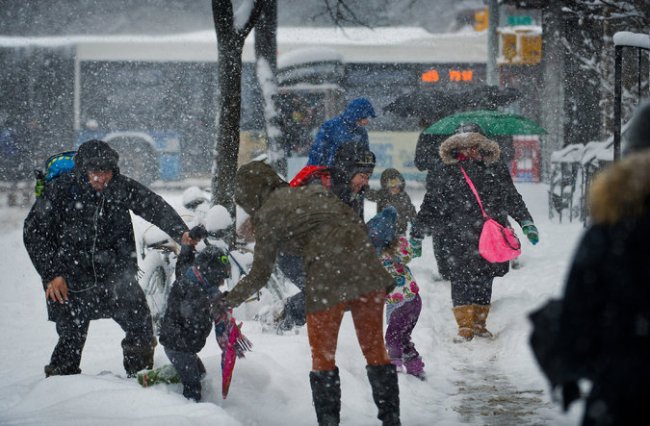 It is difficult to trudge on snowy unplowed sidewalks

Too slick to stand on, let alone travel over

Breakfast delivered to students stuck inside

Key words rearranged from article and source of photo:

“An Eskimo [Inuit] custom offers an angry person release by walking the emotion out of his or her system in a straight line across the landscape; the point at which the anger is conquered is marked with a stick, bearing witness to the strength or length of the rage.”